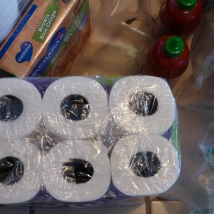 I checked and double checked most of the items to make sure it was a good price. For some of the items they were significantly cheaper than I typically spend, some were about the same, and some were slightly more. Some of the things I originally had in my cart were much more expensive than I could get at a normal store, so I changed to a different brand that had a better price, or just removed the item from my cart.

I filled my box almost to 100%, so I didn’t know how big to expect the box to be. I knew that since I had ordered 24 rolls of toilet paper and 6 rolls of paper towels it would probably be pretty big.

The box showed up on the day they said it would. It was large and weighed 33 pounds. I was really impressed with the packaging. When you opened the flaps the side flaps had handles for carrying. Everything was packaged efficiently. They did a great job of packing it. Nothing was damaged even though I flipped the package up on it’s side for awhile. There were some air packing bubbles at the top, but mostly everything was snuggly placed together.

On all the perishable foods the dates were far out, which I appreciated. The only thing that was a little disappointing was the size of the paper towel rolls. I ordered a 6 pack of paper towels, and I must normally get extra large rolls, because the regular size rolls seemed really small to me.

I stocked up on personal care items and home items for probably 4-6 months, so Prime Pantry definitely isn’t something I would be doing on a regular basis. I basically tried it because of the novelty of trying something new, and because I had the credits from Amazon.

If I want a grocery box, I would typically use Azure Standard. Which my family does once a month.

Because of how efficiently the box is packed I think Prime Pantry would be excellent for a family vacation. If you ordered a Prime Pantry box before you left it would probably take about ¼ of the space as if you had the same items loose and in grocery bags to pack.

Here is an idea of some of the things you could put in your Prime Pantry box if you If you ordered all of your non-perishable food items (chips, nuts, condiments, napkins, sunscreen,  etc), and other things you might need (foil, plastic wrap, zip-locs, napkins etc) it would be a really great way to pack for a vacation.

What you could “pack” in a Prime Pantry box for a week long vacation at a vacation rental: